Everybody knows about Leviticus 18:22, yawn yawn, the ridiculous arguments continue to rattle on in some quarters.  But there is a much more interesting passage in the Book of Kings that we rarely hear about, and it tells us rather more about homosexuality in the ancient world.

22Judah did evil in the eyes of the Lord. By the sins they committed they stirred up his jealous anger more than those who were before them had done. 23They also set up for themselves high places, sacred stones and Asherah poles on every high hill and under every spreading tree. 24There were even male shrine prostitutes in the land; the people engaged in all the detestable practices of the nations the Lord had driven out before the Israelites                   (New International Version)

Judah was one of the 12 tribes of Israel, and was said to be displeasing the Lord by erecting totems to the Mother Goddess Asherah.  Asherah, along with Astarte and Anath, was one of the three great goddesses of the Canaanite pantheon. In Bronze Age writings from the city state Ugarit she is called the Creatress of the Gods, consort of El, the Creator. 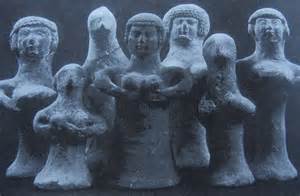 Worship of the Divine Mother had been ubiquitous throughout the ancient lands of the Middle East for at least 10 millennia.  It is hardly any wonder that the people of the tribes of Israel wished to cling on to their old beliefs and practices, that they resisted the rules imposed by the priests of the Father cult.  In the temples of the Mother Goddess, cultic prostitutes, male – female – and transgendered – played an important role in the temples, attending  to pilgrims seeking a communion with the holy spirit.  The word translated as ‘male shrine prostitute’ is Qedesha, or Kedeshah, which more literally means ‘CONSECRATED’ or ‘HOLY ONE’. This ancient and widespread phenomenon lasted among the Israeli tribes, historians reckon, until the 7th century BC. The Book of Deuteronomy comes from that time, in which it is stipulated: “None of the sons of Israel shall be a Qedesha.”  (23:17)

Deuteronomy 23:17-18 may reveal the type of religious practices involving homosexual acts from which Israelites wished to distance themselves: ‘None of the sons of Israel shall be a temple prostitute. You shall not bring the fee of a prostitute or the wages of a male prostitute into the house of the Lord your God’.

But if you grew up on the King James English translation of the Bible, instead of sacred prostitutes in service of the Goddess Asherah, in Kings 14:24  you read simply of ‘sodomites’ in the land.  All spiritual reference behind the powerful word Qedsha was stripped away, part of the Christians’ determined and persistent effort to eradicate any sense of connection between the homoerotic and the sacred dimensions of life.

This short passage in the Book of Kings tells us in a few words all we need to know about the reason the Hebrew lawmakers set out to make the act of buggery into an ‘abomination’ (which is itself a very poor translation of TO’EBAH, which scholars indicate means something more like “ritually improper,” or “involves foreign religious cult practice”).  The taboos against male sexual relations, plus against cross dressing (Deuteronomy 22:5), were part of the assertion of macho male dominance over the culture, part of stripping away the spiritual power of women and feminine men, a power they possessed through their closeness to the sacred energies of the goddess, who the warrior men of the age were determined to push out of the picture.  This process of course continued into the Christian Church, where the Mother became a humble virgin, (her darker more powerful parts tucked away and disguised inside the mystery of the Holy Spirit).

The very first translation of the Bible into English, in the 14th century under John Wycliffe referred to male and female ‘whores’ in the pagan temples and the religious role of ‘womanish men’ who ‘did all the abominations of the heathen’, including leading the Jewish people in their creation of altars, sacred groves and tall poles for the Goddess Asherah.

Kings 14:23-4 reminds us that monotheism was a concerted effort to destroy the power of the Divine Feminine and of those who served her.  However, the ultimate truth is that the Goddess, and her servants the ‘Holy Ones’, allowed this to happen, knew it must happen.  The men of war must have their day.  The result is the modern, industrial, interconnected world we now live in today.  But that world is at a tipping point. Now is the time for the Goddess to return, for her servants to wake up from the nightmare of shame and persecution that we have suffered for so long…. to wake up and find our roles again, reuniting the sexual with the spiritual, lifting the veil that has hidden the goddess and kept humanity in a state of disconnect, confusion and torment.

The Christian church spent 1000 years persecuting and destroying the male and female priests of the Old Religion in Europe, succeeding in eradicating all memory of the link between sexual and spiritual energy.  Then the Europeans arrived in the Americas and found that cross-dressing, gender benders were the sacred functionaries of the tribe.  So they set about destroying their power and did the same wherever they went in the world, importing their homophobia.  But then something happened.  The Goddess played her card.  The men lost faith in their God, they started to question and forget him.  This paved the way for our return into picture, and ultimately for Hers.

Monotheist religions have pushed the idea that reproduction is the only purpose of sex, thus denying and stripping away the spiritual potential in a sexual act, whatever the genders of those involved, to lift the human soul into the blissful embrace of the divine.

Sex between man and woman can lead to reproduction.  Sex between people of the same gender does not have this biological purpose.  It is entirely spiritual – it is about body and soul connection.  It is about opening the gates to consciousness, to love.  TO TRANSFORMATION.  Gay sex ain’t no abomination.  IT IS A RITUAL.