It’s well known that Christian holy days were placed in the calendar to replace long established pagan festivals. Spring was a time when the pagan cultures of Europe and the Middle East celebrated the rising energy of nature with ceremonies relating to suffering and rebirth. In southern Europe the Goddess Persephone/Proserpina was said to return from the Underworld at the Spring Equinox, similarly with Freya in the North. The queer resurrected deity Dionysis was celebrated in ancient Greece around the Equinox. Eostre/Ostara was a Germanic Spring Goddess, and the name Easter comes from her name. Many websites and writers will explain how Easter replaced this Goddess festival, and how eggs and bunnies are pagan symbols, but that’s not the whole story.

On the first full moon after the Spring Equinox comes Easter, the only Christian holy day still calculated by the Moon (ie Goddess) calender – and the story of Easter – of suffering, death and resurrection – was also a variation on an ancient pagan story that can be traced back several millennia, part of the mythology and worship of Cybele, the Great Mother of the Roman Empire, whose original home was in the Anatolia, in the Asian part of modern Turkey.

Worship of the Magna Mater became Rome’s state religion around 200 BC, and spread around southern Europe and north Africa as the Empire’s power spread. She was served by genderbending, long-haired, make-up wearing, loud and flamboyant priest/esses known as the Gallae, whose sexual antics and bloody rituals greatly upset Greek, Roman and Christian writers.

“They wear effeminately nursed hair,” complained Firmicus Maternus (4th century) “and dress in soft clothes. They can barely hold their heads up on their limp necks. Then, having made themselves alien to masculinity, swept up by playing flutes, they call their Goddess to fill them with an unholy spirit so as to seemingly predict the future to idle men. What sort of monstrous and unnatural thing is this?”

The Gallae were not allowed to own property in the Roman Empire, which meant they formed travelling bands, following the army and bringing goddess rituals to the people wherever they went. They were not even allowed into the city of Rome except during the early Spring ceremonies in honour of the Goddess. These ceremonies were based on the death and resurrection story of Cybele’s lover Attis.

Stand by for some very queer mythology:

Attis, the youthful consort of Cybele, was linked to Ganymede and often compared to Adonis and Pan. There are striking resemblances to Jesus too. It seems that the proud Cybele spurned the amorous advances of Zeus, who in his frustration masturbated his seed onto a rock. The rock gave birth to Agidistis, a being so powerful the Gods sent the young new god Dionysis to castrate them at birth. The pomegranate grew from their blood and Nana, a water spirit daughter of the River God, ate the fruit and became pregnant, giving birth to the beautiful Attis. However the River God, Sangarios, would not accept that this was a virgin birth and he sent Attis away to be brought up by goatherders. Attis and Agidistis met in the woods one day and became lovers – a tale full of shock and significance to the ancient Greeks as it involved the reversal of the accepted homosexual relationships of the time. In Greek culture it was considered acceptable for the older male to penetrate the younger in the sexual act. As Agidistis was a eunuch he took the passive role with the young, virile Attis.

Attis, Agidistis and Cybele became a Trinity of queer lovers. But Attis, brought up in the goatherder family, was also due to marry a human girl. Tales tell of frenzied ritual magic in the run up to the wedding, the jealous Cybele sending Agidistis to wreak chaos on the event. The guests go crazy, the bride cuts off her own breasts and Attis castrates himself to avoid the marriage. The castration botched, Attis died and violets bloomed from his blood. Bereft, Cybele took her lover’s testicles, bathed them in holy water, wrapped them in his clothes and buried them in the earth. In the oldest versions of this tale Attis was reborn as the daughter of the goddess. As the Christian religion grew, and as the theme of death, resurrection and salvation took a more central place in religious thought, the Attis tales changed to depict him resurrected with a crown of stars, associating him with the Milky Way and calling him ‘the leader of the all the tribes of divine beings’ and the ‘servant and charioteer of the Mother’. 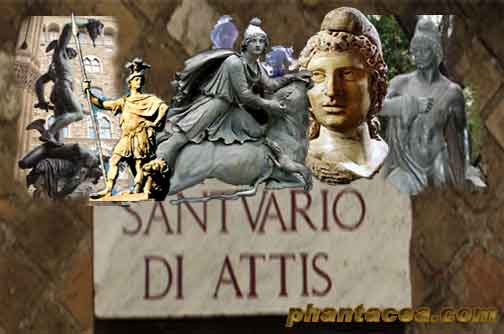 The Attis legend was played out on the streets of the ancient Roman empire in the weeks following the Spring Equinox:

22 March Arbor intrat. An effigy of Attis was tied to a pine tree felled in a sacred grove of Cybele, decorated with violets and ribbons, then carried in procession and set up for adoring crowds to see. The Gallae accompanied the fallen Attis, weeping, and the next day was dedicated to a day of mourning.

24 March Dies Sanguinis The Day of Blood. The Gallae led a frenzied dance around the pine tree, to the music of cymbals, flutes and drums. There was blood – self-flagellation with whips, or using knives to slash the body – and bloody offerings made to the tree. There was lots of screaming and shouting, spectators joined in, some even joining the Gallae initiates at the ritual climax moment of self-castration. Once initiated, Gallae priests would henceforth live as women. There was even a tradition that the newly castrated galli would run through the streets and throw his testicles into somebody’s garden. It was then the garden owner’s duty to take care of the new priestess.

“As the Gallae sing and celebrate their orgies, frenzy falls on many of them and many who had come as mere spectators afterwards are found to have committed the great act. I will narrate what they do. Any young man who has resolved on this action, strips off his clothes, and with a loud shout bursts into the midst of the crowd, and picks up a sword from a number of swords which I suppose have been kept ready for many years for this purpose. He takes it and castrates himself and then runs wild through the city, bearing in his hands what he has cut off. He casts it into any house at will, and from this house he receives women’s raiment and ornaments. Thus they act during their ceremonies of castration.” Lucian, De Dea Syria 2nd century CE

25 March.. Hilaria. The resurrection of Attis was proclaimed and three weeks of celebrating the birthday of Cybele began, including the anniversary of her arrival in Rome on April 4th, and the founding of her temple of April 10th.

Easter is known as Pascha in Greek and Latin parts of the world, this name relates to the Jewish Festival of Passover, which the early Christians chose consciously as the time to celebrate the resurrection. As Christianity gained converts in the Roman Empire the timing of the resurrection ceremonies led to “violent conflict on Vatican Hill in the early days of Christianity between the Jesus worshippers and pagans who quarrelled over whose God was the true, and whose the imitation.” (historian Heather McDoughall, quoted in the Guardian)

In the 21st century we no longer need to have such arguments. With mystical vision we can see that death and resurrection stories exist for a purpose – to reveal to us the journey of the soul: they relate to the mysteries of ego surrender, devotion to spirit, and inner divinity awakening – as well as existing to attune us to the cycles of nature as the dormant period of winter ends and new life springs forth abundantly.

The shift into the fire spirit of the Aries month, the first month of Spring, can be a tough one. Just like nature, we experience a rush of growth, and it can feel uncomfortable. The longer days after the Equinox bring a sense of optimism, but we may soon find there is pain to express, old feelings to release in order to make way for new, rising stress to deal with as the pace picks up – putting it simply: growing pains. The pagan rituals of mourning and suffering in the early days of Spring shook off the dull energy of winter and cleared the way for a prolonged period of festivities in celebration of the divine feminine, leading towards the summer months. Arguably the Christian holy days of Easter perform the same function. Just as the Spring energy rises, there is a need for some inner reflection, and probably to release some grief and anger, in order to clear our soul energies, attune us to spirit and the goddess, ready for a glorious summer ahead.

The pagan religions of the ancient Meditteranean and Europe embraced sexuality in its many forms as potentially sacred rites.  Christianity’s triumph from the 4th century ensured the eradication of the popular Goddess rites and stories, to such an extent that the modern LGBTQ+ movement has emerged with little knowledge, and less understanding, of the sacred roles played by same-sex loving and gender-fluid people for many thousands of years of earth history.