“Depriv’d of Root, and Branch, and Rind,

Yet Flow’rs I bear of ev’ry Kind:

My Head, with Giddiness, goes round;

And yet I firmly stand my Ground:

All over naked I am seen,

The British quite naturally come in for plenty of criticism for the way they imposed Christianity on the many peoples of the largest empire the world has ever known, but we Brits should remember that Christianity was also a foreign religion once to us, which was imposed on us from the 7th century onwards. Very few of us Brits today are aware that 1000 years after that effort began, the Old Religion, our native faith, which was sometimes erotic, ecstatic and practised while intoxicated, was still very much alive and widespread among the populace, despite the efforts of church councils, parliamentary laws and the bloodthirsty activities of witchfinders to eradicate it.

In 1660 a 134 feet tall Cedar Maypole was erected on the Strand in London to celebrate the return of the King – the Restoration of the monarchy after 18 years of strict Puritan rule under Oliver Cromwell was for most a huge cause for celebration. Historian Catherine Arnold writes in ‘City of Sin’ that as Charles II took the throne “the city erupted into one giant party which was to last for the rest of his life.” 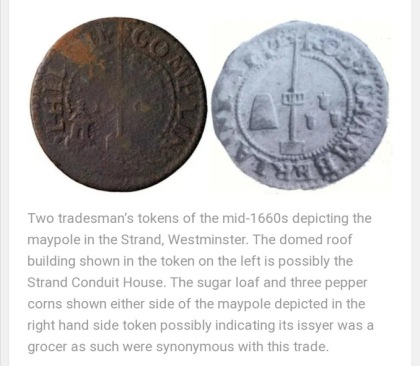 For 18 years in the middle of the 17th Century the theatres and fun palaces had been closed, pubs were raided, fig leaves placed on naked statues, heavy fines imposed for swearing, and maypoles across the country were felled, considered by Puritans “a heathenish vanity” and a “stynkynge idoll”. For almost two decades the government made a concerted effort to control the worship, behaviour and to reform the morality of the British nations, until the people got utterly sick of it. The Puritan Commonwealth led by Oliver Cromwell was one of the first attempts to impose a rigorous fundamentalist religious culture on a populace. It failed spectacularly.

The English Civil War began in 1642, King Charles I was deposed then executed a few years later. Puritans took over the reins of government and enacted many laws to control public behaviour. This included the death penalty for incest or adultery. Brothels had been big business in London for centuries, a source of income (through rented properties) for both church and state, and just prior to the upheaval, in 1641 parliament had decided prostitution should be regarded not as a crime, but as a public nuisance. But under the Commonwealth headed up by Oliver Cromwell the whorehouses, known as ‘stews’, of south London became warehouses for trade, with only one or two high class brothels remaining, such as ‘Oxford Kate’s’ in Bow Street.

The Maypole is one of the most powerful symbols of pagan magic – it represents the union of earth and heaven. It is decorated and danced around to invoke that experience of cosmic connection in the revellers. To the Puritans of the 17th century, who were determined to complete the Protestant conversion of the country begun a century earlier under Henry VIII, the Maypole was a “stynkynge idoll” because it was associated with drunken and sexualised goings on. In 1644 Maypoles were outlawed, and poles around the country torn down, including London’s central pole on the Strand, which stood at 100 feet tall and had stood there since at least the end of the previous century, possibly at a site long regarded as a pagan centre of worship. For sure Maypoles had been erected in London since centuries (millennia?), with permanent sites appearing from at least the Middle Ages.  Other famous London Maypoles included those at Cornhill and Aldgate Wards. The resurrection of the Strand Maypole in 1660 was a grand occasion with the King in attendance. The new pole was taken in procession with much drumming, morris dancing and festivity from Scotland Yard to the site on the Strand. It took a crew of seaman four hours to erect the pole, and the merriment continued, as Catherine Arnold said, for 25 years until the death of the King.

Diarist Samuel Pepys (1633-1703) was delighted when the May rites returned, recording in 1661 that he and his wife and friends going to Woolwich to spend the night in the countryside in preparation ‘to ‘gather May-dew’ in the morning.

It was not only in central London that the downfall of fundamentalist religious control was met with an upsurge of pagan sentiment, as evidenced by the reappearance of maypoles around the country. Philosopher and amateur archaeologist (he discovered the Avebury stone circle!) John Aubrey (1626-97) wrote that poles “were set up at every crossway”. A pamphlet entitled “The Cities Loyalty Displayed” celebrated the return of the Maypole to London.

The huge Strand Maypole was severely damaged by strong winds in 1672, and only a stump remained until 1713, when it was rebuilt again – this time it only survived until 1717. The Maypole site was taken over to build the Church of St Mary le Strand, which still stands, and the pole itself was bought by Isaac Newton, who used it in the building of an aerial telescope. So the last London pagan ritual pole, representative of our ancient search for spiritual answers, became part of the search for a new scientific explanation of our existence here on Earth.

Even so, this was not the end of Maypole celebrations! Historian Randy P Connor in ‘The Pagan Heart of the West’ looks for signs of continuing May celebrations, and relates that in 1708 the British Apollo reported that it was commonly accepted that the Maypole rite was an ancient, pre-Christian, ceremony.  Gullivers Travels author Jonathan Swift (1667-1745), a devout Anglican, celebrated the Maypole, personifying it and giving us its view on the Puritans, –

“And once a Weaver in our Town,

A damn’d Cromwellian, knock’d me down.

I lay a prisoner twenty Years;

And then the Jovial Cavaliers

To their old Posts retor’d all Three,

I mean the Church, the King and Me.”

“No couple-beggar in the land
E’er joined such numbers hand in hand.
I joined them fairly with a ring;
Nor can our parson blame the thing.
And though no marriage words are spoke,
They part not till the ring is broke”

Beltane was still celebrated in many places around the UK in the late 18th century, often in the vicinity of ancient stone circles. Brady’s Claris Calendaria recorded that “not only the common people, but those of every rank in the vicinity of the place, joined in the tumultuous dissipations of the day… gave a free indulgence to… riotous and disorderly practice, dancing through the streets in wanton attitudes… Even the priests, joining with the people, in procession to some adjoining wood on the May morning.” The French revolution gave a political air to Beltane rituals, with Maypoles becoming known as ‘liberty trees’ in France, and revolutionary Henri Gregoire (1750-1831) wrote that during the American revolution against the British, “on the banks of the Delaware… maypoles became the citizens’ rallying signal in every community.” This surely fed into the eventual adoption of May 1st as a socialist day. Maypoles, and May celebrations, were historically always times when conventional behaviour and morality broke down, the hierarchical order felt threatened by the libidinous freedom displayed by the common people, May Day has always belonged to the people, and the hugely popular Maypole on the Strand in central London was a powerful statement that, whatever the rulers and churches were saying, the people were still in touch with the free-spirited, pagan roots of the British nation.

Cross-dressing gender-bending was a significant feature of May festivities, the roots of which can be found in ancient Dionysian ecstatic worship that used to take place in the Spring season, and also in shamanic pre-religious cultures globally.  The ancient, and perhaps also not-so-ancient, peoples of the planet possibly understood more about the interplay of gender energies within one’s own being than most of the world seems to today.  Ancient cultures had many words for gender-variant people – the fluidity of gender and the magical power given by that fluidity was once quite universally recognised, and eventually feared. Cross-dressing in ritualised celebration was known as a way to unite the inner genders and access ecstatic states.  In much earlier times the genderfluid priest/esses of the pagan deities, such as the Gallae servants of Cybele, the priestesses of Isis, Diana, Hecate and many others, had set the example of erotic, ecstatic worship that opens up the inner world to the divine realms, and this knowledge has always been present somewhere in the human psyche.  Even though it has been thoroughly repressed first by sex-phobic religions then by a materialist, scientific paradigm that divides Creation into separate parts and leaves us feeling alone in the universe, the erotic, ecstatic call to transcendence exists in us all and will one day find its way back into our understanding.  The urgent need in the world today is to reunite humanity with its spiritual nature, which is exactly what a Maypole is there to do.

How about we reclaim the Maypole for London? Resurrect it as symbol of the British people waking up from the dream of separation, of being both oppressed and oppressor and renewing our pacts with the planet and with the spirit worlds. In the late Stone and Bronze Age 4-7000 years ago the people of Britain developed a highly sophisticated mystical culture, perhaps leaving behind the many stone circles on these islands as a reminder to the people of the future that this journey here in human incarnation began  in communion with both cosmos and nature, and will end that way.  Those ancient people understood the natural rhythms of creation, and the magical tool and symbol that is the Maypole was very probably bequeathed to us by them.

When i was at Kingsmead Primary School in Stowmarket, Suffolk in the 1970s, we used to dance around a maypole every Spring.  Only decades later did I learn about the subversive and erotic/ecstatic nature of maypole rituals, as part of the Radical Faerie tribe.  The Faeries, perhaps more than most pagan groups, have embraced the sexual and subversive power of the Maypole, but of course it’s not just Faerie queers who feel the call of the Old Religion.  Paganism was illegal in the UK from the reign of Henry VIII until the 1950s, not that that stopped the Beltane revelries, and the return of our own ancient British magical traditions has been gradually spreading through the nation and beyond since repeal of the Witchcraft Act.  Wicca, a British religion, invented in the 1950s as a way of structuring the pagan path, is hugely popular in the USA, where it is recognised by the military as an official religion.

The Maypole could have a big future, as it has had a long past.  There is no more joyful symbol or community ritual, nothing quite so powerful and dramatic.  As humanity, and as the Brits, deal with the existential challenges coming our way in the third decade of the 21st century, the Maypole represents our connection to both the physical and spiritual realms, and our role as human beings to unite the two.